Mississippian and Maya cosmology The Hand constellation and the Milky Way 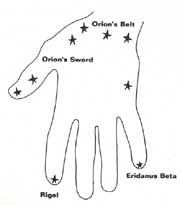 As I have been working on a Biloxi ethnography (still in progress) and researching both MIIS1 and Maya mythology and cosmology, interesting similarities occur between the two. For instance, it is interesting that both cultures focus on Orion's Belt as having major cosmological significance in relation to creation, life, and death. In Mississippian cosmology this is reflected in the Hand constellation, where Orion's Belt forms the wrist of the cut-off hand (various Plains myths refer to a celestial chief's arm or hand being cut off and left to dangle in the sky) facing downward in the night sky (Lankford 2007). In Maya cosmology, Orion's Belt is referred to in the Popol Vuh, the Maya creation story, as both the 'three stones of creation' and the 'hearthstones' (Freidel et al. 1993). 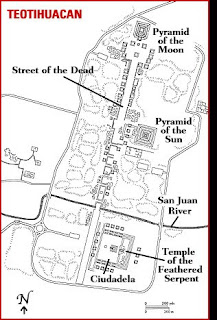 The fact that the stars of Orion's Belt were important to ancient Native Americans is evident in the pyramidal layout of Teotihuacan's three largest pyramids: Pyramid of the Moon, Pyramid of the Sun, and the Temple of the Feathered Serpent, which seem to match quite well the celestial configuration of Orion's three Belt stars. Of course, interestingly, the three pyramids of Egypt's Gizeh also seem to match this configuration!


Similarly, both cultures refer to the peculiar movement of the Milky Way in the night sky. The 'rising and falling sky' motif was apparently prevalent throughout the US Southeast (among at least the Chitimachas, Alabamas, Cherokees, Choctaws, Shawnees) (we can probably safely add Biloxis here), the Plains (Foxes, Poncas), and the Southwest (Navajos) (Lankford 2007: 204), represented in mythology and apparently based on the nightly movement of the Milky Way.  The Milky Way moves from a near vertical position, in which  Mayas refer to it as the 'cosmic tree,' to a nearly horizontal position, in which Mayas refer to it as the 'sky canoe.'  This is the celestial canoe carrying the Two Paddler Gods who set the 'Three Stones of Creation' (Orion's Belt, Ak 'Ek, or Turtle) in place, from which First Father, or the Maize God, is reborn, thus creating a new universe (Freidel et al. 1993).  The Canoe then 'sinks' on the western horizon at dawn, the time of the birth of creation (ibid.).

The Hand constellation is said to mark the location of the Portal to the Otherworld, at least in Southeastern mythology. Within the Hand constellation "lies a galaxy (Messier 42) visible as a fuzzy star that is understood to be a hole in the sky, a portal" (Lankford 2007: 197). "Today, [Alnitak, Saiph, and Rigel in Orion] are said to be the three hearthstones of the typical Quiché [Maya] kitchen fireplace, arranged to form a triangle, and the cloudy area they enclose (Great Nebula M[essier] 42) is said to be the smoke from the fire" (Tedlock 1985: 261 in Freidel et al. 1993: 79). The Southeastern Hand constellation portal may indeed be the same portal into which the Maya king "Pakal falls on his sarcophagus lid and out of which beings of the Otherworld emerge" (Freidel et al. 1993: 87).

The Hand-and-Eye motif of the MIIS. Could the 'eye' symbol represent 'see' while the 'hand' symbol represents the constellation? This may represent the idea of a god or gods seeing or looking down onto the earth from the Hand constellation, wherein lies the portal, possibly also represented by the eye, between earth and the Otherworld.

Similarly, the Milky Way plays similar roles in both cultures as a 'Path of Souls' used by the dead to journey into the Otherworld. In fact, the Mayan term for 'death' is 'och be, literally meaning 'enter the Road [of Souls],' meaning the Milky Way. There is a "quite similar understanding of the Milky Way among Siberian groups" (Lankford 2007: 212) suggesting "an impressive time-depth" (ibid.) for this association of the Milky Way with death and as a path to the afterlife. 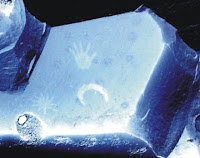 This petroglyph from Chaco Canyon (once home to the Anasazis) in the US Southwest, thought by some to commemorate the 1054 CE Supernova explosion. The starburst may represent the explosion while the crescent moon and hand symbols represent the event's location in the sky: just above the moon and at or near the Hand constellation. If this interpretation is correct, it would show that the Hand constellation was known even in the Southwest and perhaps throughout much of Native America.

More work remains to be done on Southeastern (or Mississippian) cultural beliefs and cosmology in comparison with those of Mesoamerica. Perhaps more entries to come on this very complex topic....

I have been fascinated by the connection between the mesoamerican civilisations and the Mississippian civilisations for a very long time. You should look in on the work of Richard Thornton, who has published a lot of work comparing mesoamerican architecture with muskogean mound architecture and town planning. In the circles I have been reading online, it's pretty much accepted that the southeastern Muskogean peoples were migrants from different mesoamerican civilisations, and there is lots and lots of linguistic and sociocultural proof. And when you just look at our cultures and mound cities, it's pretty obvious. I don't know why the social scientists have been hiding this reality from the general public for so long. One of the recent things I read hinted that many of the southeasterners may have been slaves who left Teotihuacan en masse. Others were Maya. As far as I can see, the mississippian core cultural explosion in the southeast happened between the collapse of the highland Maya and the arrival of the Mexica.

Thanks for your comment, Rolande. (Sorry I'm a bit late in reading it - it's been a crazy semester and it just ended.) I truly don't know about the Muskogeans-from-Mesoamerica hypothesis. I'd be especially interested in the linguistic clues. There is no doubt that there's culturally much similarity between Mesoamerica and the ancient Mississippian world. However, one of the roadblocks to acceptance of the mass immigration idea is that there is no archaeological evidence that the ancient Mississippians or Southeasterners were interested in cacao or chocolate, which is odd if the Muskogeans were originally immigrants from Mesoamerica. I need to look into the linguistic similarities at some point, but, from what I've seen so far, there doesn't seem to be much linguistic influence in the Southeast from Mesoamerica, certainly not what one would expect to see from a mass immigration.