While working on my dissertation, which partly involves what has come to be called Mississippian culture (ca. 1000-1700 CE), I have been investigating iconography and archaeology linked to this culture. Some of you may have heard of or seen the Serpent Mound of Ohio, dating from ca. 1050 CE (see diagram of it below): 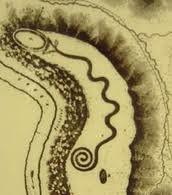 While many archaeologists still debate its actual meaning, I have found an interesting correlation between this image and the Biloxi language, a dormant Siouan language once spoken in the Lower Mississippi Valley. In Biloxi, the word for 'star' is iNtka (the N here represents nasalization of the prior vowel /i/), which literally breaks down to iNti 'egg' + -ka 'ATTRIB' suffix, or a suffix meaning 'like/somewhat', thus 'egg-like'. This correlation between a star and an egg is intriguing.

And what does a star, or egg, have to do with a serpent? Well, in the Mississippian world, a world which the Biloxis were once part of, a serpent, or, in particular, a rattlesnake, was associated with rulership or monarchy, much like the cobra was associated with ancient Egyptian pharaohs and the dragon was associated with the ancient Chinese emperors. Further, the serpent was associated with the Underworld. Ideas of the Underworld and Above World were associated with priests or otherwise powerful people who had access to esoteric knowledge not generally available to the common people. The association of a serpent from the Underworld to an egg, representing the stars (heavens), or the Above World, is thus powerful imagery for Mississippian aristocracy, who, along with priests, had knowledge of all things in the Underworld, the Above World, and the Earth in between. (This imagery, by the way, goes back probably well even before the Adena cultural horizon of Ohio, ca. 500 BCE-200 CE.) A good look at the Ohio Serpent Mound diagrammed above thus appears to show a serpent, or snake, perhaps giving birth to creation and the universe in the form of an egg, a creation to which any great ruler in the form of a God-Monarch would wish to align themselves.

But the story doesn't end in Ohio. Look at the topmost photo below of an image at the Blythe Intaglios in the desert of southern California associated with the Mojave peoples (perhaps among others): 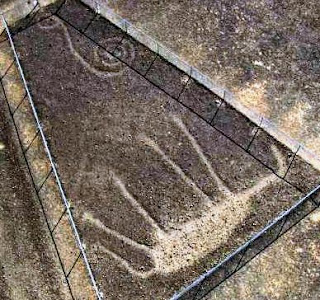 Note anything similar to the Ohio Serpent Mound, such as the apparent snake with coiled tail and large head, or perhaps wide open jaw expelling an egg? (Unfortunately the dating of these intaglios is unclear, but currently they are placed between 1000-1500 CE.) If this correlation between two monumental depictions of a serpent and egg on two ends of the North American continent holds, this would suggest the apparent migration of a Mississippian cultural icon to the California Southwest, proving long-distance transcontinental trade and the long-distance migration of Mississippian cultural elements well into the West.
Posted by Dave