Among the interesting books I read during the summer was one called The Mummies of Urumchi, by Elizabeth Wayland Barber (1999).  She is an archaeologist, linguist, and textile expert all wrapped up in one.  During the 1990s she went to western China to visit the museums of Ürümchi, the capital city of China's Xinjiang province, a.k.a. the Uyghur1 Autonomous Region, also sometimes called East Turkestan.  Her main objective was to examine the mummies that have been retrieved from the sands of the Teklimakan Desert, or the Tarim Basin, found in almost perfectly preserved condition despite being around the same age as their Egyptian counterparts, ca. 2000 BC.  Barber examined not only the physical features of the mummies but also the fabric of their well-preserved clothing.

One of the "Mummies of Ürümchi" unearthed in the Teklimakan desert

These mummies are not east Asian in appearance, but rather they exhibit western European physical features, including being tall (men and women often over 6 feet tall) and reddish-blond hair, with their method of textile manufacture and patterns appearing most like those of northern European groups, especially that of the Celts.  Were there truly people of northern European descent living in the deserts of western China? 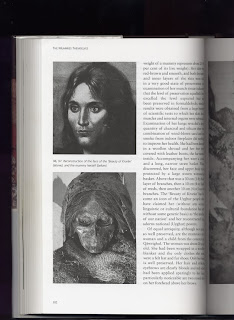 The "Beauty of Loulan" - mummy, bottom, and facial reconstruction, top.

There is both archaeological (Caucasoid mummies, fabrics, textiles) and linguistic evidence for it.  Late in the nineteenth century, documents were found in the Teklimakan region (Tarim Basin) written in an Indic (Sanskrit-like) script that, when transcribed and translated, revealed an Indo-European (the large language family that includes Sanskrit, Persian, Latin, Greek, Russian, German, and English) language with close affinity to the Celtic languages.  The language is called Tocharian, known to the Greeks, since Alexander probably encountered them, as tokharoi. Further, artwork of the region dating back to the ninth century reveals paintings of men with Caucasian features, reddish-blond head hair, and prolific facial hair.  That they were converts to Buddhism is revealed not only by the artwork but also by the unearthed documents in the Tocharian language that relate to Buddhist teachings and philosophy.

1 Although the Tarim Basin, or Teklimakan, was once a Tocharian and Persian settlement region, the Uyghurs, a Turkic group, often erroneously called Chinese Muslims, have inhabited the region since about the ninth century.