Cusco, An Imperial Capital
As part of the course I’m taking on central Andean cultures, we’ve been studying Inkas and their once vast empire that was even greater in size than the Roman. Extending from southern Colombia down the Andes Mountains and along the Pacific coast to what is now Santiago, Chile, the Inka Empire had over 11,000 miles of roads. Inkas had no wheeled vehicles, and horses were unknown until the Spanish conquistadors arrived, but they did have native llamas and alpacas, which were adept at climbing up and down their steep mountain roads laden with up to 50 lbs. each of supplies or trade goods. Since there was a shortage of croplands in the steep mountainous terrain, Inkas became adept at terracing fields up steep hillsides and mountain slopes. Inkas did not use money, and they didn’t even have markets. Instead, men and women were employed on an as-needed basis by Inka overlords for community projects often involving the manufacture of goods or intense manual labor. In this marketless economy, workers were "paid" for their labor by receiving clothing, food, and other necessities and goods. Feasts of copious amounts of food and drink (including chicha, Inka corn beer) were often lavished upon these workers during and after projects. Inka emperors and overlords were very adept at distributing food, clothing, and other items to their populace and nobody wanted for anything.

Cusco, at a literally breathtaking elevation of 11,500 feet, was the capital city of the Inka Empire. It contained monumental edifices and architecture, grand palaces and temples trimmed in gold and silver, making it a fantastic sight to the Spanish invaders (à la Tenochtitlan of the Aztec Empire—how ironic that the Spanish were so impressed with these New World cities, saying there was nothing like them in Europe, before they laid them to waste!). Nobody could visit the city empty-handed, and anyone who visited had better have a sack of goods or materials strapped to their backs. The city was clean and well-kept with large areas of green parkland surrounding its massive imperial architecture.
What’s perhaps most interesting about this Native American capital, however, is that it appears to have been planned and laid out in the shape of a running puma, or cougar, viewed from above. (I can already foresee you UFO and extraterrestrial enthusiasts thinking alien intervention à la Nazca lines!) Look at the city plan above and see if you can spot the animal’s outline in Cusco's overall design.
Okay, if you missed it, take a look at this: 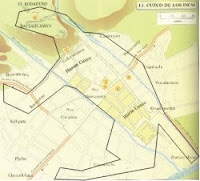 The Sacsayhuaman, or Imperial Palace, is the puma's head while the confluence of the two rivers is its tail. While jaguars roamed the other side of the Andes toward the Amazon, pumas or cougars roamed the Andes themselves.

I think you would be interested in joining www.hypertope.com , which is this new Academic Networking Site for researchers and scholars...

Normally, joining is free, but by invitation only... but for a brief promotional period only they have opened the gates, so that the initial members can join in, and invite their own academic colleagues, and so on...

you can join here www.hypertope.com/user/register

It would also be nice if you could post a blog item about it, so that the word spreads.

Thanks for the suggestion. I have indeed posted this to my blog and am planning to join myself. Sounds interesting.

And what corresponds to the puma's legs? I can't see anything there.